So you might have heard that we’re now accepting host applications for our 2018 House Concert Tour. Sometimes people write me to ask questions about what hosting a house concert is all about. And sometimes they don’t write me to ask those questions, but I have fun imagining what those questions might be, and I make up silly FAQ posts about them. And here they are, for your enjoyment, updated semi-daily, as I remember to update: (The first in my hip new series called Imaginary FAQs.)

Q: “Will I need to pay you a bunch of money to come play a concert at my house for me and my friends?”

A: Nope! Most of our house concerts are funded by what we call an open-donation model, so that it does not have to cost our hosts anything to be a host. Instead of paying us directly, you invite your guests to come to a donation-based concert, at which they’ll be asked to make a donation in whatever amount they want at the conclusion of the show.

Basically, you invite a bunch of good people, I do my best to wow them, and then you ask them to say “heck yeah that was great and meaningful to me” with their donations .

(I know: it’s a big risk for us to travel all that way and put on our show with no guaranteed income for our work. But we’ve done this trust-fall with so many enthusiastic hosts and supportive communities around the country for long enough that we know chances are high that we’ll be caught lovingly by your outstretched arms. And who doesn’t love a good thrill, anyway?)

[And of course if you’d rather just pay us a bunch of money to play a concert at your house, we can certainly arrange that as well. I mean, we’re not dummies.]

We’re accepting applications for 2018 hosts now through April 13. PM me for more info! (The second in my hot new series called Imaginary FAQs.)

Q: “Do I need to have a big, fancy house for you to come play a concert for me and my friends?”

A: Absolutely not! We have done house concerts in big fancy houses, in cozy modest living rooms, in backyards in the suburbs, on rooftops in the city, on lawns in the country, in garages because it was raining outside. The thing is that it’s not about how fancy or beautiful the house or yard is at all — what makes for a great house concert is the people there.

So all you need is a space — like any of those listed above, or some other private space you have access to — that can seat 30 or more of your friends/family/neighbors to share a magical house concert experience with us.

(And when we say “seat,” this could mean blankets on the lawn or pillows on the carpet if there aren’t enough chairs for everyone. Like I said: no fancy required!)

We’re accepting applications for 2018 hosts NOW through April 13. Message me for more info! (The third in my instant-classic new series called Imaginary FAQs.)

We’ll walk you through our step-by-step, well-honed system for creating all the ingredients that make for a fun & successful house concert — from establishing your guest list, to wording your invitations, to setting up the concert space, to the flow & timing of the event, all of it.

And we’ll kick it all off by sending you our 2018 House Concert Host Guide, which is a nice-to-look-at, informative, and engaging overview of how we do it.

(If you’re considering being a host this year, asking to receive a Host Guide isn’t a commitment; it’s a way for you to learn more as you decide whether you want to jump into this with us.)

We’re accepting applications for 2018 hosts NOW through April 13. Message me for more info! (The fourth in my critically-acclaimed new series called Imaginary FAQs.)

Q: “Can you come to my house on exactly Friday, August 3rd?”

A: Sorry, no. We cannot guarantee that we’ll be able to schedule a house concert with you on any particular date. The reason for this is that if you end up hosting a concert for us, you will be one of approximately 75 stops we’ll be making all over North America, and we have to draw a route for the tour that gets to all those houses in a (hopefully) somewhat logical path.

BUT! We’ve got this really smooth system for picking dates for the tour that fit the schedules of most of our hosts. Basically, we collect some info from you, and then we do this 4-dimensional math problem that requires a lot of coffee, a map, a calendar, a No. 2 pencil, and a pink eraser. Then — after a couple days pretending like I’m Russell Crowe in A Beautiful Mind — we come up with a route that has, in the past, accommodated dates for 99% of the people who submit qualifying applications to host a concert.

(Alternate answer: Maybe! If we’re real lucky and the stars align just right for us to be at your house on your favorite date.)

[Alternate answer #2: Maybe! When science invents teleportation technology that allows us to tour in a non-linear way through space and time! Fingers crossed.]

We’re accepting applications for 2018 hosts NOW (like, TODAY!) through April 13. Message me for more info and let’s do this. Q: “If I told you once last month or last summer or 3 tours ago that I’d like to host a house concert, is that all I have to do to get a date on this year’s tour?”

A: You aren’t getting off that easy, my friend. If you’d like to host a house concert on our 2018 tour, *right this very moment* is the time we need to hear from you about that. But it’s not like it’s harrrrd or anything.

All ya gotta do is:

1. Send me a message or an email or a text or a note with a carrier pigeon that says something like “Me! Me! Me! Pick me! I wanna host a house concert!” And then …

2. I’ll send you our 2018 Host Guide with all the info you’ll need to know about your very important host duties. And then …

3. You’ll fill out the application that is due by Friday, April 13. And then …

4. We’ll pick a date to come to your house and make magic this summer.

So, whenever it is that you’ve eaten all the Cadbury eggs and Peeps you can handle, and you’re thumbing around your phone on your couch later today, right before you doze off into that sweet, sweet sugar-crash Easter Sunday nap, send me that message! (The sixth in my blockbuster new series called Imaginary FAQs.)

Q: “What towns / cities / states / regions of the country will you be bringing the tour?”

A: The traditional way in which musicians book their tours is that they decide which cities they want to perform in, and then they find places to book shows in those cities. But we don’t do things the traditional way. (I mean, how booooring would that be?)

We’ve flipped that old model right on its head. We don’t choose the tour; the tour chooses us!

What we mean by that is that we don’t decide in advance where we want to tour; instead, we ask our people (that’s you!) “Hey, who’d like to host a house concert for us on this tour?” and then we work to draw a route that hits as many of those people’s houses as humanly possible. So whether you live in the country, the big city, the burbs, a small town, north, south, east, west, or somewhere in between, we’ll bring the tour to YOU.*

(*That is, IF you request a house concert host guide from us and fill out your application by next Friday.)

You’re in charge! Tell us where we’re bringing our 2018 House Concert Tour! Email me for details. xox 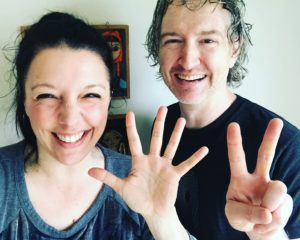 (The seventh in my probably-soon-to-be-award-nominated new series called Imaginary FAQs.)

A: You have exactly 6 days, 8 hours, and 47 minutes as of the posting of this FAQ to get that baby submitted, my friend.

Need an application? No prob! Message us now and for a limited time only …

(this is starting to sound like a late-night tv ad) …